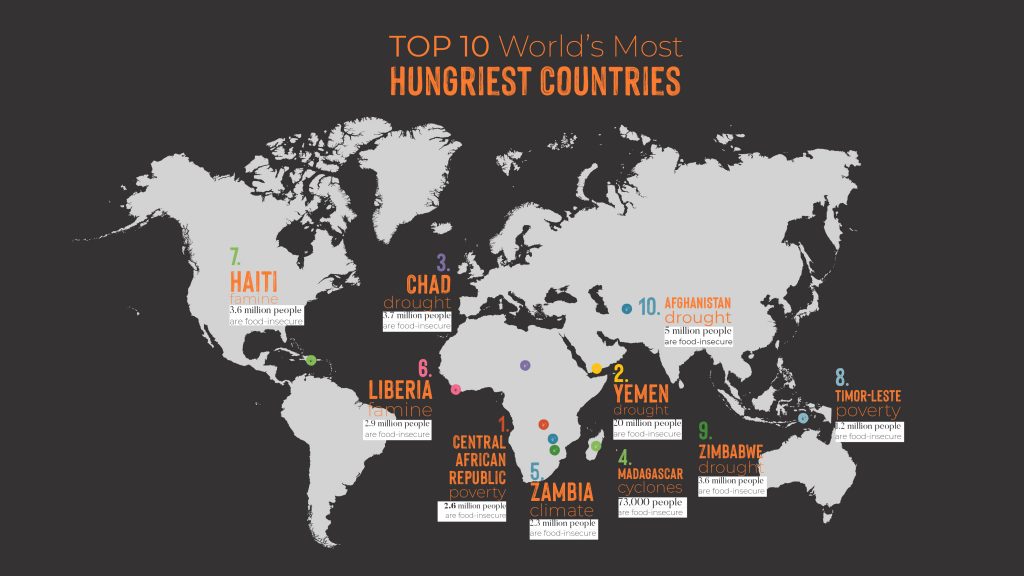 World hunger is one of the main problems that our world faces today. What do we know about world hunger? Who is most affected by it? It is important that we know what is going on in the world so that we can try and help as much as we can. Here are 10 facts about world hunger

There is enough food in the world to feed 10 billion people, yet world hunger continues to be an issue. The reason for this is because hunger is not due to lack of food, but because of poverty and inequality.

There is an unequal distribution of income and the lack of resources results in millions of people being unable to properly provide for themselves and their families, thus not having access to supplies or food.

In 2019, over 820 million people did not have enough food to eat. 2019 marked the third year in a row that the number increased, according to the UN.

Countries that experience conflict and violence are found to have more people who suffer from hunger. Sudan and Yemen are two examples of war-ridden countries today facing famine and poverty.

1/8th of the population of the largest continent on earth are hungry. Almost half a billion people are malnourished in Asia, despite its economic development. Most of those who are suffering from hunger in Asia are children.

Women and girls have a higher chance of being affected by hunger in every continent than men do. This is due to gender inequality that results in pay gaps, which in turn results in poor living conditions and an inability to provide for themselves and children.

While about 70% of our world food supply comes from farmers, herders and fisherman, they are among the most vulnerable to food insecurity, especially those in rural areas.

World hunger isn’t a light subject. But amongst the tragic, there is some good news. In 1990, around 19% of the world population were undernourished. As of 2018, it dropped to 11%. The world’s goal is to end hunger worldwide by 2030.

The United Nations Sustainable Development Goals to end hunger continues to be a priority. We can end world hunger once and for all. Together, let’s take a step towards making the world a better place for everyone. Donate today https://wearehumaniti.org/causes/share-meal/